Onward to development: Cardinal Brewing, in the heart of the community

Through a serie of articles, DEV presents entrepreneurs from Vaudreuil-Soulanges who have put forward the development of their business and the region.

As soon as you walk into Cardinal Brewing, located on Main Road in Hudson, you have this feeling that the microbrewery has been part of the community for a long time. Although it’s only been 3 years since the brewery opened, Cardinal has become a popular local gathering place, despite the many challenges that bars and restaurants faced during the pandemic.

I was welcomed by Will Tomkinson, the founder and president of Cardinal Brewing, for a chat over a refreshing apricot beer on an unusually warm and sunny day for May.

The beginnings of Cardinal Brewing

Six years ago, Will and his family decided to move from British Columbia for many reasons: to live in a big open community, for their kids, for Hudson and its surroundings that make it a fantastic neighborhood.

Home brewing has been a passion for Will for many years. Back in B.C., he was part of founding a home brewing club with some friends to share their passion for home brewery. Some of the members also started their own microbrewery and it was an inspiration for Will to see how they transformed the town with their business.

“I’ve seen back in British Columbia just how much a microbrewery can do in a town, in a region. To contribute to town life, to the arts and culture scene, to create that feeling of belonging in a community. I have for many years been a home brewer. As I progressed in my corporate career, more and more, I wanted to align my own future with my desires and interests.” explained Will.

It was more than five years ago that Will started to craft a business plan and began looking for a location for his microbrewery. From the start, Will envisioned his brewery in an old auto body shop located on Main Road in Hudson. It was a perfect spot: in the center of town, with two big roll-up garage doors in the front, with enough room for a terrace outside and room for a production area in the back. Luckily for him, before it was even on the market, Will’s real estate agent contacted him with the opportunity to buy the property. They had to move fast to find financing and get partners on board.

“Développement Vaudreuil-Soulanges (DEV) came into the process for the next steps. We met very soon with Joël Lessard, Principal Manager, Financing and Business Services, at DEV, but also here at the brewery, before it was renovated, to discuss the business plan. What I really like with DEV is how the conversation was open: about the business plan, its strong points, the missing information and good insights. It made the plan stronger for investment partners and helped us to launch the business. At that point, DEV played an educational role for us.” said Will.

Once the location was secure, they started to do major renovations to make it suitable to brew beer safely and to bring to life a welcoming place for the public. Will and his team made a big effort to have a very low carbon footprint while doing so and for the business going forward: sustainability is part of their business model. The company is making efforts to reduce its use of plastic and most of its packaging is made from cardboard, like their four-pack beer holder.

He also explained to me that most breweries the same size as Cardinal Brewing usually use fossil fuel such as natural gas or oil to power the steam boiler that is used to boil the beer. He had the option of a steam boiler powered by natural gas located in Montreal, which would have been quickly available. Instead, they chose to import a boiler powered by electricity: the cost of the machine was more expensive, but the ongoing cost is less than gas and uses clean energy.

The challenges of the pandemic

As the company was renovating and putting the equipment in, the pandemic arrived and everything was shut down. It caused delays in delivery for the boiler that was coming from the USA. It was one of the many challenges that the pandemic created for the company. When they were finally able to open in October 2020, they could only sell cans of beers like a convenience store.

Since the boiler didn’t arrive on schedule, they had to brew on a much smaller pilot system, designed for testing recipes. Every week, they had to brew beers, can it all and in only one day, they were sold out. People were excited for the brewery to open so the stock went fast. They got a great response from the community.

In March 2021, all the brewery equipment was finally installed and running, and they officially brewed for the time on their big brew system. Brewing at scale allowed Cardinal to start distributing beer in cans for the first time, but they faced yet another setback caused by the pandemic: with restaurants and bars closing on and off, most other breweries had also started to can their beer and sell it in groceries and convenience stores. When the company started its distribution, many places had already full shelves and couldn’t accept any newer brands. Despite this challenge, Cardinal now has over 170 restaurants, bars, grocery and convenience stores who have purchased their beer. Thanks to a deal with a beer distribution company in Boucherville, Cardinal now distributes beer throughout Quebec, as far as Rimouski, the Eastern Townships, and La Sarre.

You can also find Cardinal products at every Tite Frette, a specialized beer retailer across Quebec. You can even find their products in Paris, at a beer store selling only Canadian beers. Cardinal is also working on a collaboration with a brewery located in Farnham for their apricot wheat ale that I had the pleasure to taste. In a near future, they hope to expand into the Eastern Ontario market.

Développement Vaudreuil-Soulanges also helped the brewery to find a program for financial aid that they qualified for and accompanied them in the process. They were also included during the local Rallye organized last summer by Tourisme Vaudreuil-Soulanges. For Will, the partnership with DEV has been a powerful and rewarding relationship that continues to bring new opportunities.

Cardinal Brewery: in the heart of the community

“We have a huge priority as a business to understand the local environment that we are in. Whenever we are bringing in new partners such as food services, entertainment, music or contractors, we always approach local businesses first. For example, the food that we bring in is from local restaurants located in Hudson. Everything we do, we try to think local first!” explained Will.

As an example, when you look around the brewery, there is an art display going on. Every month, there will be a new local artist featured on the wall offering work for sale. Will made up the name for this: a “Bièrenissage”!

Cardinal also founded the Hudson Oktoberfest which took place last October and that will happen this year on the last weekend of September 2022. The first edition was successful on all counts: thousands of people gathered at Cardinal Brewing to drink beers, listen to local bands, eat great local food and hang out with neighbors.

This season’s opening event took place on Saint-Patrick’s Day in March 2022 with a music fest throughout the week. For Cardinal, it was like they had been introduced into the community again after the restrictions of the pandemic.

At Cardinal, they offer a variety of easy-drinking German and English style beers that fill a gap in the Quebec market, such as Wheat ale and ESB (a classic British ale style), which are less common in the province.

Right now, you can taste their rotating fruit beers for the summer with flavors such as apricot, raspberry vanilla, peach, or a blanche flavored with juniper berries. The brewing team is planning to make even more unique limited-edition seasonal beers that will be exclusive to the taproom, with something new every month.

Soon, you will see the brewery taking part in local events such as the Saint-Lazare Farmer’s Market or the Festival de cirque in Vaudreuil-Soulanges but also outside the region like the Biglou Porsche Festival in the Laurentides. They also took part in the rallye organized by Tourisme Vaudreuil-Soulanges on May 28 and 29.

Will Cardinal Brewing have its own restaurant in the future? It’s a dream for Will but as of now, he’s more than happy to collaborate with local restaurants and caterers.

Head brewer Kevin James, from Beau’s Brewery in Vankleek Hill, is the newest addition to the brewing team, which includes another brewer, Evan, and Wesley, Will’s son, who helps make sure the equipment is clean, a crucial part of crafting a beer that is always good and consistent. Raphaëlle is the tap room leader, joined behind the bar by Kayla, AJ, Tim, Jenna and Aube. Jeremy handles sales and distribution. Briana, another partner in the business, is responsible for marketing and communications and is also involved in developing policies and procedures, managing staff, improving customer experience, event programming, and more. There are two other partners as well: Will’s father, Richard Tomkinson, a constant source of inspiration and advice for him, and Duncan Cowie, who started the project with Will.

“One of the best things of the project for me has been the people that come on board to work with us. They have been so uplifting and committed to what we are trying to do as a business that it’s becoming a like a family, a real team effort.” said Will proudly.

As I walked out of Cardinal, a few beers in hand to take home, customers were coming in delighted by the service and the variety of beers. Cardinal Brewing is a gem; be sure to make a stop if you’re passing through Hudson! 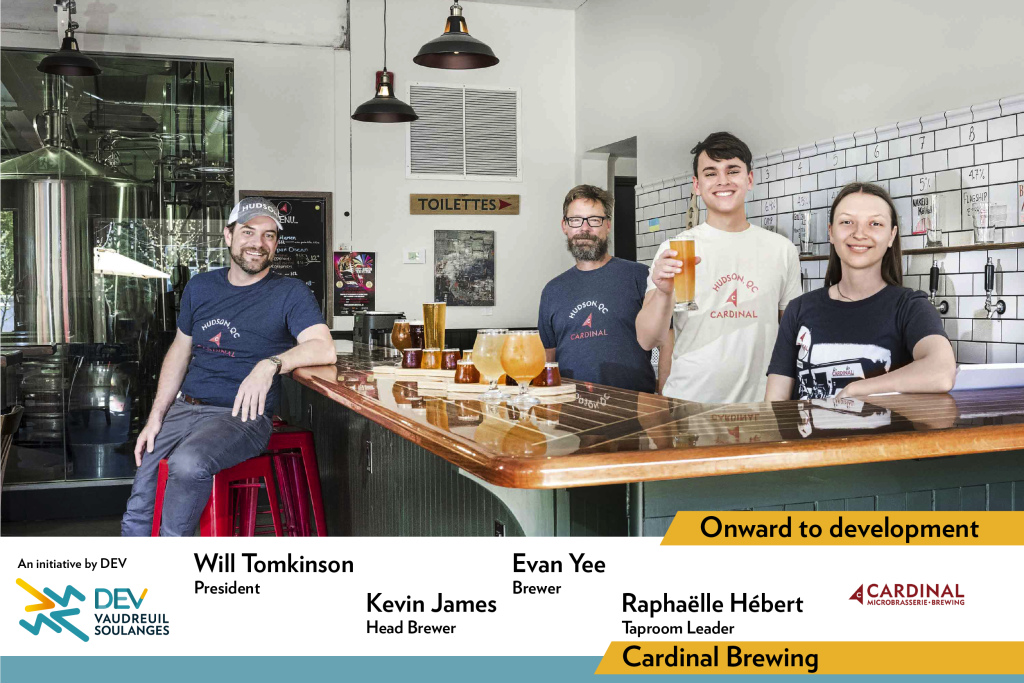 3e joueur
All our newsletter